Tasmanians worship the soil, the waters, the mountain air, and all of the creatures—from heritage pigs to effervescent yeasts—that live in between. As tiny Hobart rapidly develops a reputation for some of Australia’s best restaurants, the backbone of the food scene is the weekly markets and humble local producers that supply the city’s increasingly chic food scene. The city’s outsize culinary culture is happily reliant on delicious Tasmanian products, like sweet orchard fruits and backyard garden vegetables, rich dairy, creamy wildflower honey, and craft beers that rival the very best in the world—all things that are available in Hobart’s amazing markets.

Many places have farmers markets, but Hobart’s markets have truly become the premier social events of the week. On Saturday mornings, people flock to the bustling Salamanca Market for savory meat pies, craft jams, single serve pavlova and sausage on a bun. “The Salamanca Market is a Saturday tradition dating back to the 1970s,” says Mary McNeill, who operates Tasmania’s Gourmania Food Tours. “It was originally a craft market but has burgeoned into Australia’s largest open-air market, selling anything from organic produce from Harvest Feast and olive oil from Ashbolt Farm to lavender products, soaps, wooden craft items, clothing, and books.” 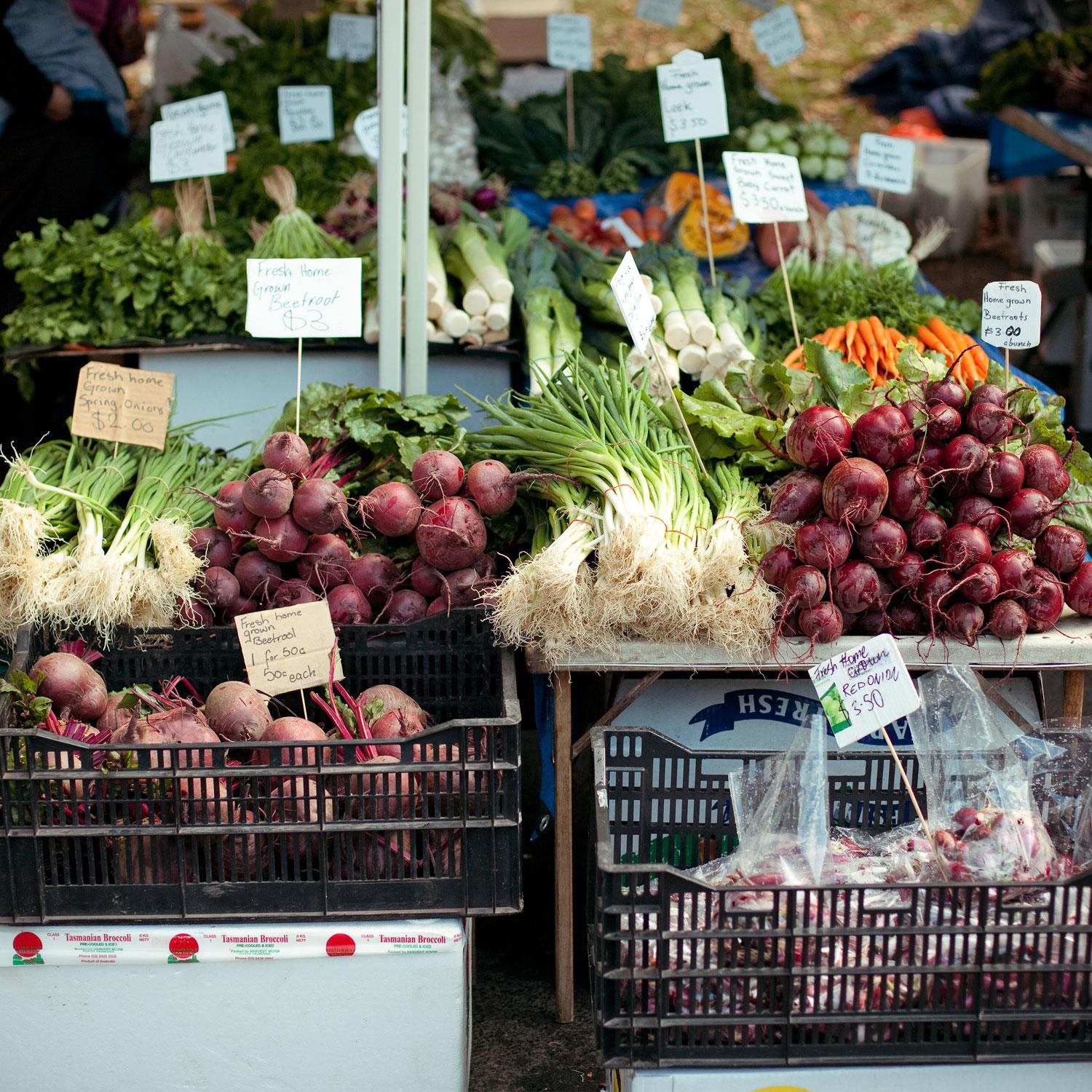 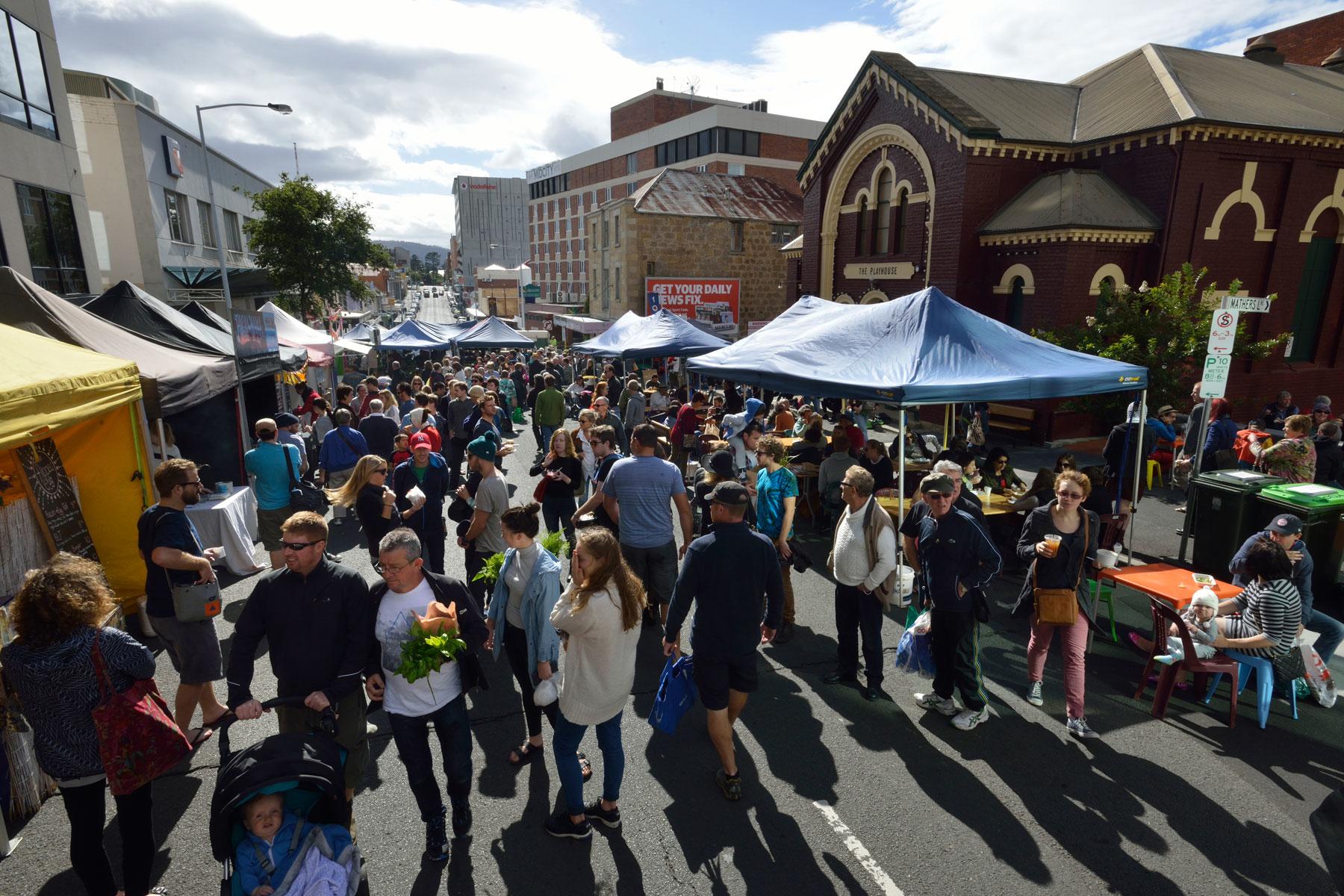 But like many local foodies, McNeill has a particular affinity for Sunday’s Farm Gate Market. “It’s the only place to be if you’re in Hobart on a Sunday morning,” she says. “You can eat there or buy fresh produce, potted herbs, and cut flowers to take home. And the producers are on location, so you can talk to them directly.” From early morning, Bathurst Street is lined with mono-producers selling honey, organic blueberries, sourdough bread, Thai sauces, mustard, and fragrant herbs to an enthusiastic shoulder-to-shoulder crowd. A series of food trucks serve up wallaby burritos, wood-fired pizzas, paella, sushi, and Korean street food. Many of the stalls are sold out by noon.

Hobart’s fabulous raw ingredients also tie in nicely with the broader food scene in Hobart, which is both heavily dependent on wonderful local produce and has drawn a uniquely devoted group of chefs and producers from across Australia—most of whom go marketing on their weekends, of course. 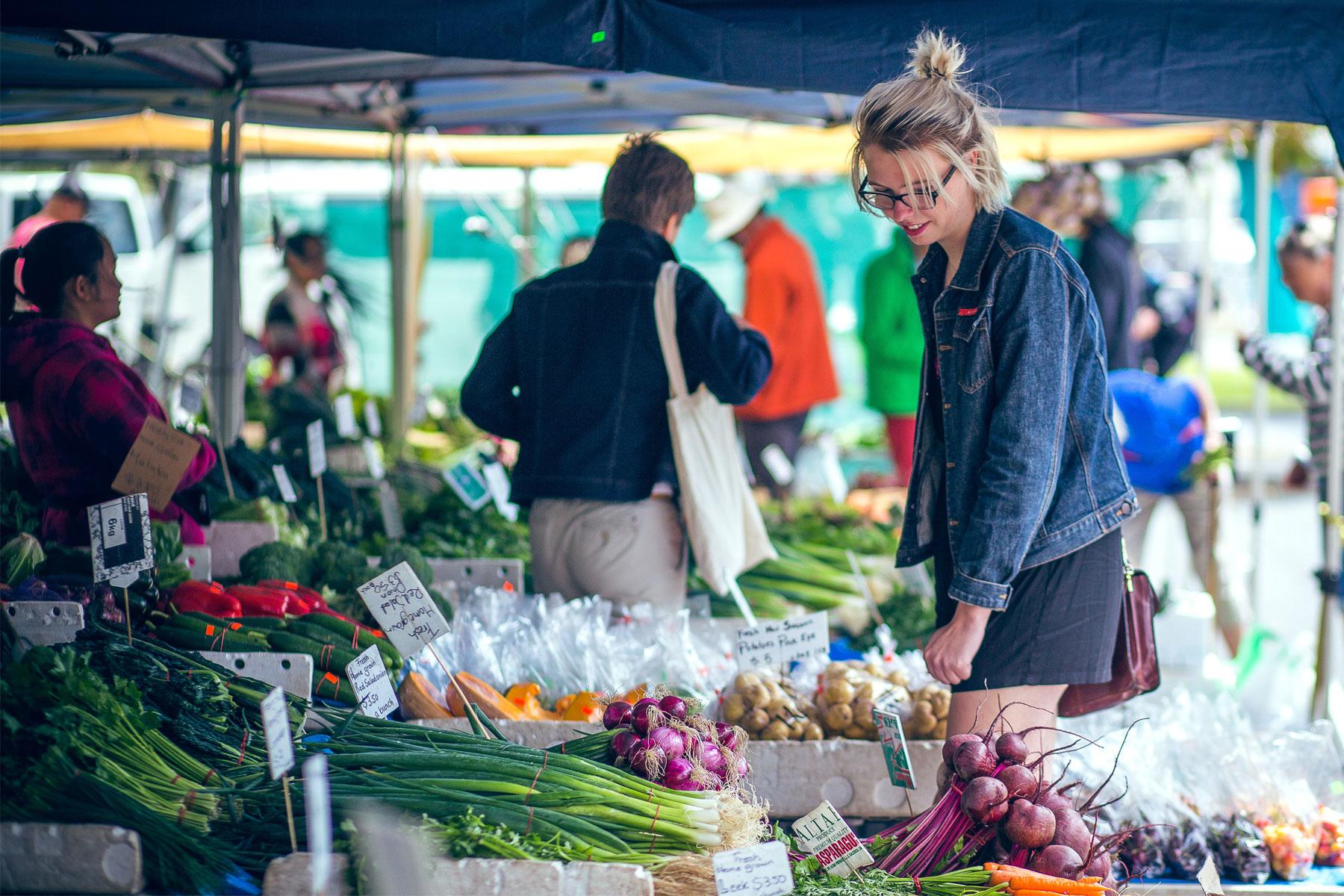 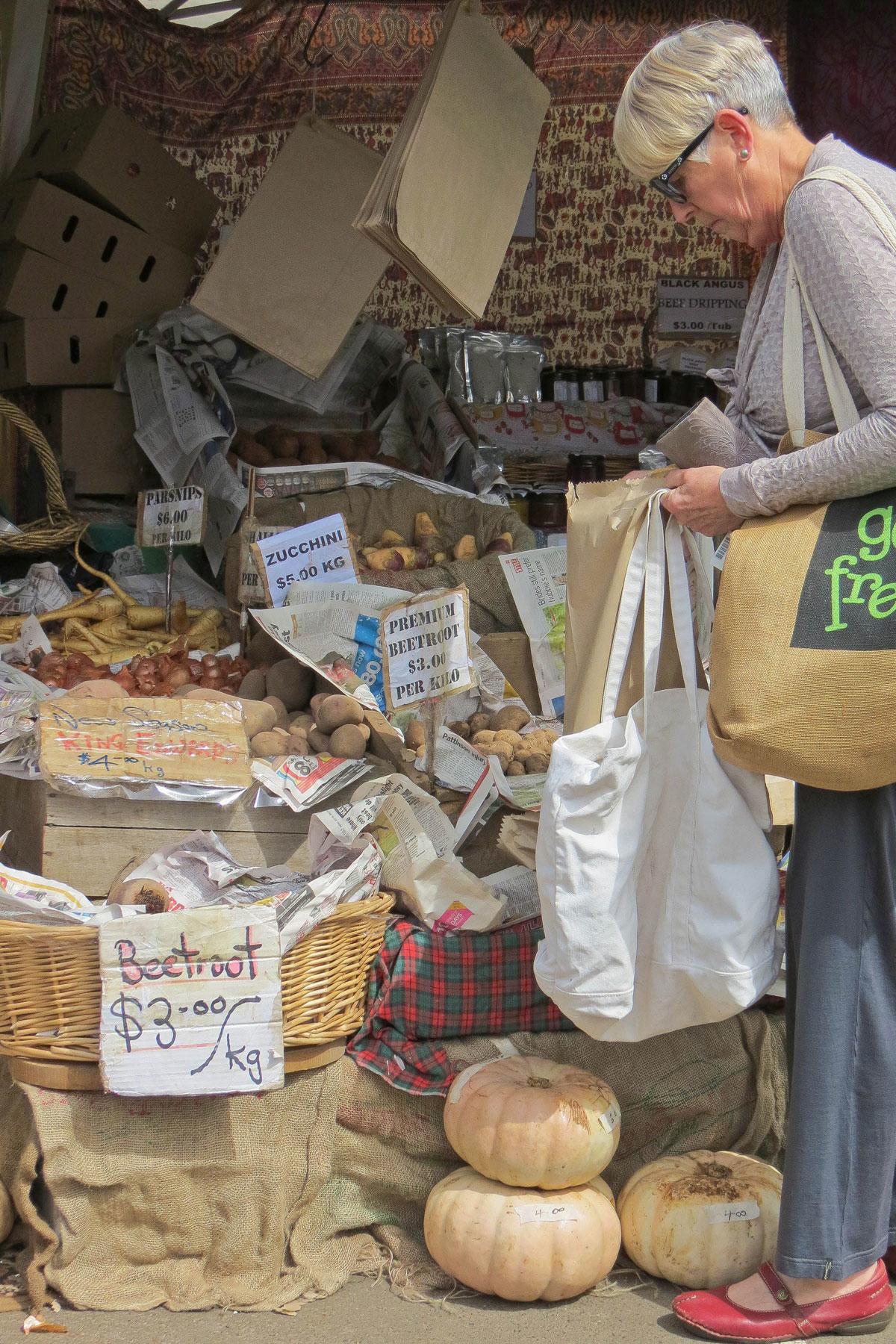 At Aloft, a Scandinavian-chic restaurant with a wall of glass overlooking fishing boats bobbing in the pretty Hobart harbor, Chef Glenn Byrnes was keen to chat about local produce while working away in his open kitchen. He conspiratorially emerged from beneath one counter with a small bowl of thick purple compote he’d just made from plums foraged on his way to work. Byrnes praised Tasmania’s spice producers, and he opened jars to show off the intensity of the smoked paprika harvested nearby at Weston Farm Produce.

“It’s an island and people learn to be self-sufficient. We’re not afraid to get our hands dirty.”

This kind of enthusiasm is common to Hobart, whose little restaurant community has grown significantly in the last five years, both in size and stature. But Franklin, founded by Chef David Moyle, is a uniquely devoted temple of worship to local produce; Moyle has sometimes sourced his sweet baby peas and zucchinis from very small-scale backyard growers. “I spend a lot of time driving around and buying a seemingly inconsequential amount of things,” says Moyle. “But this is just an extension of how people have always lived here. It’s an island and people learn to be self-sufficient. We’re not afraid to get our hands dirty.” 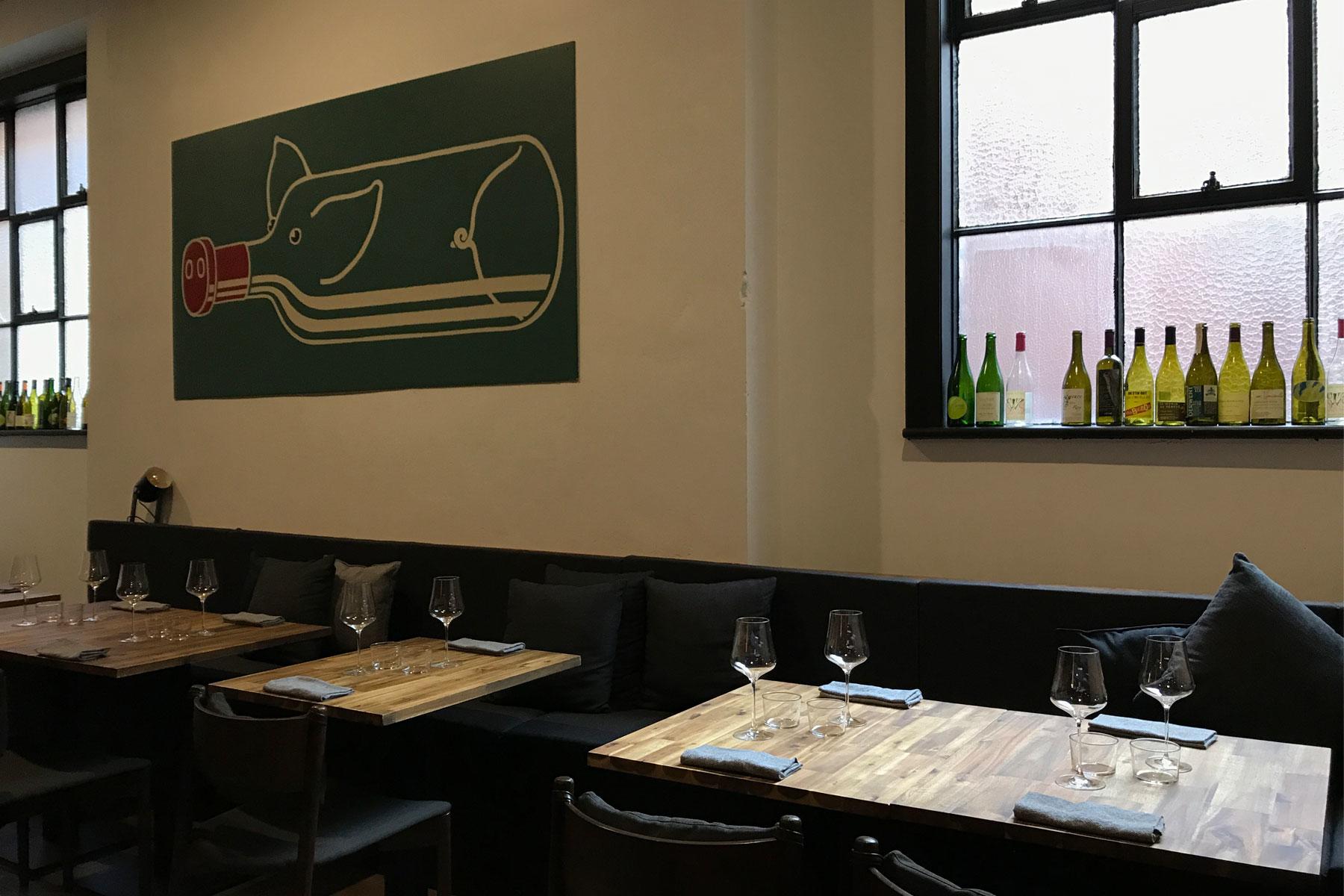 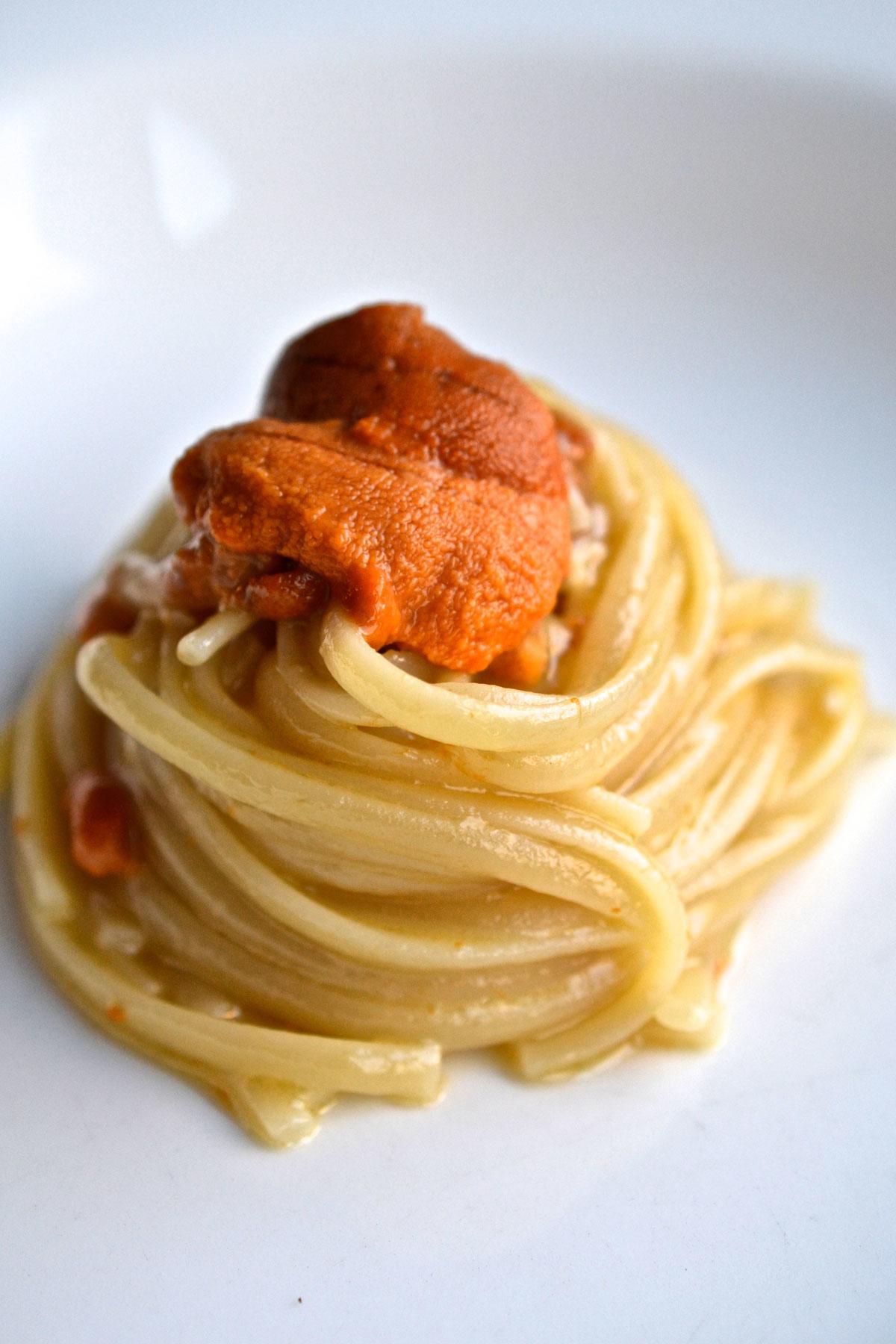 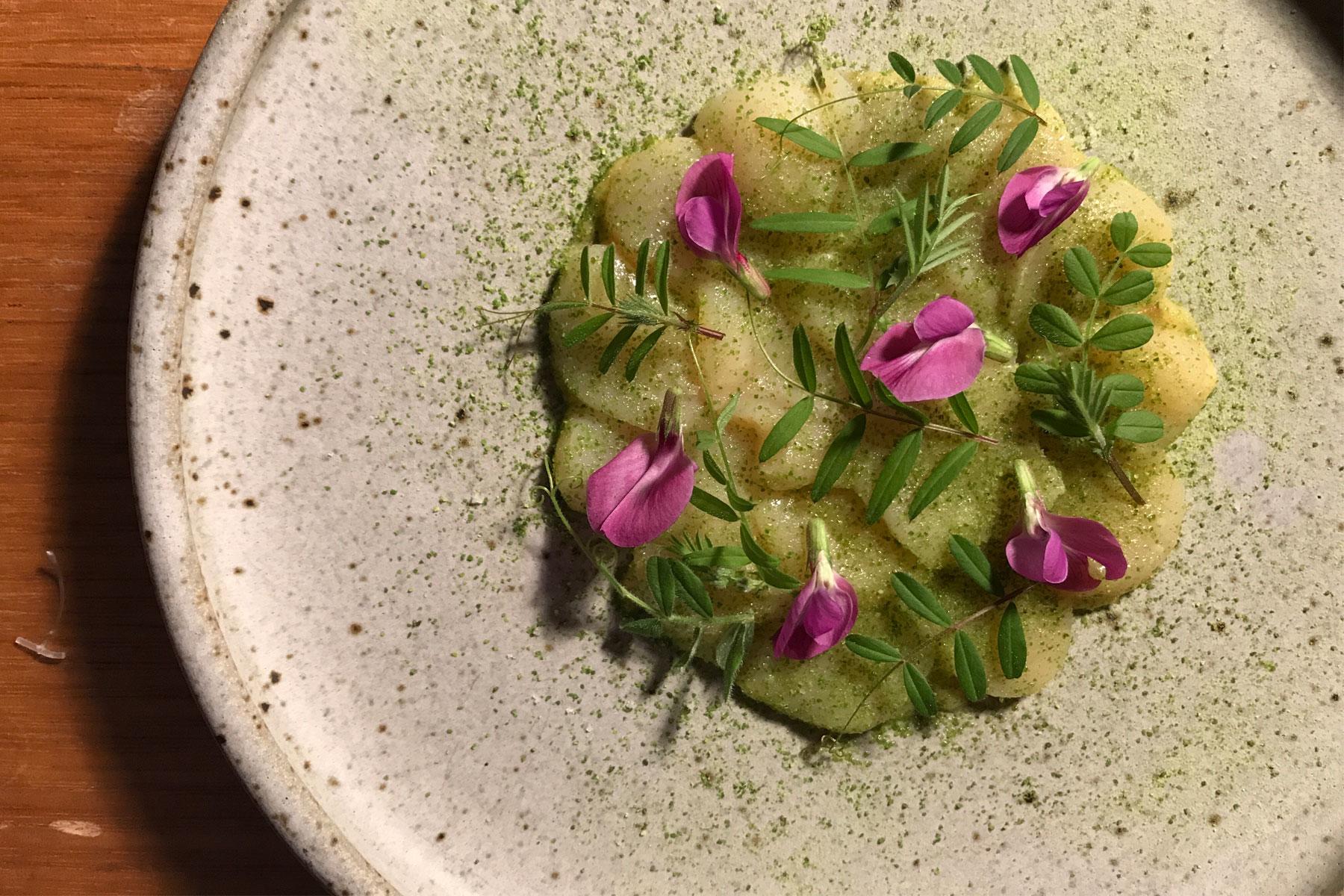 The magnetism of both MONA and The Source has created a bigger pool of diners, who now flock to the newer establishments designed to show off local ingredients. At Fico, an intimate bistro that marries European influences with Tasmanian ingredients, tender seared octopus meets crisp baby radishes and sweet basil while impeccable house-made ravioli is stuffed with creamy local goat’s curd. Dier Makr, which offers a perpetually changing seasonal food and cocktails menu, highlights local produce by producing relatively spare pairings of perfect local produce, like savory nettle porridge or sea urchin with parsley oil and cured fish roe.

Even unfussy pub The Quartermasters Arms in the heart of Hobart’s Central Business District serves guacamole made with Tasmanian sweet peas and roasted Cape Grim grass-fed beef rump, and only offers Tasmanian beers on tap, like Moo Brew, which tend to be less hoppy than most craft brews. “We’re at the asshole end of the world here,” says owner Stuart Addison, referring to Tasmania’s remoteness, “but we’ve got a little piece of Shangri-La. A lot of care goes into absolutely everything we make here.”

What’s the Best City for a Foodie Vacation? We Asked a Celebrity Chef

This Is the Ischia of Elena Ferrante’s Neopolitan Novels

Slay Across the Plains: Where to Find Drag Culture in the Midwest and Texas

Please don't close or refresh the page while we are processing your submission
Please be patient, this could take a few minutes.