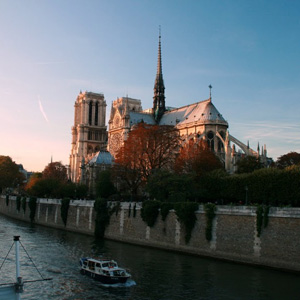 This Central European river cruise will take you from the gothic skyline of Prague to Remich on the Main, Rhine, and Moselle Rivers. It begins with two overnights in Prague, one of Europe’s most magical cities. You’ll see Prague’s best-known treasures like St. Vitus Cathedral, a gothic masterpiece that dominates the skyline. Your river cruise will get underway as you sail through the Main Danube Canal with stops in some of Germany’s most intriguing cities. Also sail through the dramatic Rhine Gorge, considered the most beautiful view of the Rhine River. See ancient castles standing majestically on cliffs 400 feet above the water. In the heart of the Moselle region, the wine village of Bernkastel, surrounded by Germany’s largest expanse of vineyards, will fascinate you with its narrow streets and half-timbered houses which have been standing since the Middle Ages. Before you leave, we’ll introduce you to some of the famed wines of the area. Along the enchanting Moselle River, make your way to the ancient city of Trier, Germany-believed to be even older than Rome. Many remnants of ancient Rome can still be found, such as imperial baths and the Roman Bridge, with stone pilings dating from 144-152 AD. End your Avalon European river cruise in Remich.

Founded in 902, Bamberg remains a medieval-looking city known for its symphony orchestra and specialty “smoke” beer. Bamberg was also the first site in Germany of lithographic printing featuring movable type.

The city’s winding streets are filled with baroque patrician houses as well as the breathtaking 11th century cathedral of Holy Roman Emperor Heinrich II, which houses his tomb as well as that of Pope Clement II. Tour the 16th century Alt Residenz (Old Residence) and the 17th century Neue Residenz (New Residence), both of which were bishop’s houses.

Along its banks, you will often find picturesque Bavarian villages that would delight any photographer’s eye.

Rüdesheim is a small, very quaint “Bavarian” village in Germany on the Rhine River. Points of interest include the Asbach Brandy Distillery, Cable-car to Niederwald Monument, Medieval Museum of Torture, a Falconry and many wine festivals throughout the year.

Intersecting trade routes, a favorable climate, fertile soil and a primary waterway brought wealth to Würzburg from the early Middle Ages. Symbols of this wealth-and the artistry it bought-are what still attract visitors: the massive, medieval Fortress Marienberg that towers over the city; the Residenz, arguably the most ornate Baroque palace in Germany; St. Kilian’s Cathedral, with its Romanesque exterior and splendidly Rococo interior; and Neumünster Church.

Those who make the trip to Würzburg are generally surprised by its warmth, charm and extensive variety of art, architecture and culture. Würzburg’s prime location on the Main makes for delightful strolls along the promenade, and riverfront cafes overflow in good weather. Sightseeing boats offer sightseeing excursions and trips to neighboring villages, and passenger ships plying the Rhine, Main and Danube make the city a prime stop.

Würzburg lies in the heart of Franconian Wine Region, and wine and wine-making are central to life in Würzburg. In autumn, the hills surrounding Würzburg and throughout Franconia are dotted with grape pickers, who fill baskets and dump them into waiting trailers.

Prices are per person, land or cruise only, based on double occupancy. Offer subject to availability and change without notice. Some restrictions may apply. Please ask us for details.

Charges not included in the land vacation price: airfare to and from the start of your vacation; airline baggage fees including checked and/or excess baggage fees; Federal inspection fees for the Federal U.S. Customs and Immigrations; agricultural tax; other per person taxes imposed by government entities; applicable cruise taxes, fees, fares and port charges; passports; visas and vaccinations; transfers; tips to your Tour or Cruise Director, Local Host, driver, Local Guides, and/or ships’ crew; gratuities on ferries, trains, and cruise ships; laundry; telephone; minibar; alcohol, beverages, and food outside of the contracted menu as presented at a hotel or restaurant (these extra items will be billed to you before leaving the hotel, ship, or restaurant); additional excursions and activities not listed as ‘included’ in the itinerary; porterage at airports or train stations; Travel Protection premiums; and all other items of a personal nature.

Click on the buttons below to request a quote on this deal or contact us directly with further questions or comments.

Request A Quote Send To A Friend Have A Question? Contact Us